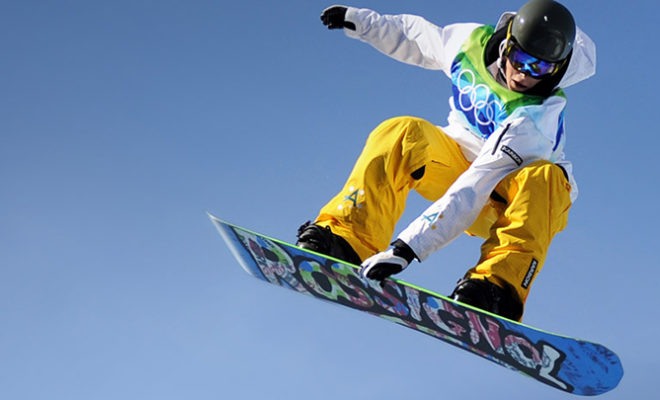 In the wake of the 2014 Sochi Olympics, I thought I would pay homage to an athlete who competes in one of my favorite events: Snowboarding, half-pipe and slopestyle.

The walls of the halfpipe are 22 feet tall. The slopestyle course has tricky rails and huge jumps (picture a skateboard park, but on ice and snow). I’m not discrediting the athleticism of any other event, but why anyone would subject himself or herself to speeding down (and up) a ramp on a board, with nothing but a poly/carbon helmet protecting you, is beyond me. That’s why I like watching. As an athlete, there’s nothing more exciting or meaningful to me than watching someone who competes at the pinnacle of their sport. Thus, I present to you, Torah Bright.

This 27 year-old Aussie beauty trains out of Salt Lake City, Utah but grew up in Cooma, New South Wales, Australia. This resilient athlete suffered a broken jaw AND intense migraines in the two weeks leading up to the 2010 Vancouver Olympics – yet still managed to receive a Gold medal in the women’s snowboard half-pipe. Most recently, at the Sochi Olympics, she won Silver and placed 7th in the snowboard half-pipe and slopestyle, respectively.

When I initially saw her, I thought immediately of Claudia Schiffer, which isn’t a bad association to make. She has a combination of a playful and fresh appearance, but can pull out deadly, piercing eyes if the mood strikes her. Between her incomparable athletic prowess, and her looks, this stunner from Oz has earned the right to be March’s #GirlCrush.