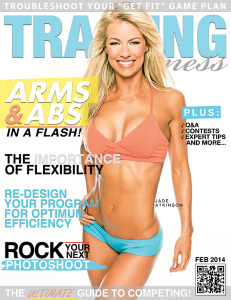 Born and raised in the small town of Sarnia, Ontario, Jade Atkinson grew up with a very unique combination of interests; sports/fitness and cars. She is a CFBB National and IFBB International Level Bikini Competitor and an avid drag racer with the International Hot Rod Association. She began drag racing at the age of 11, winning 4 championships (2 juniors), making her the first and only female in Canada to win a Top Dragster season championship (back to back two years in a row). Growing up as a competitive athlete, figure skating, boxing, and playing baseball, she has always had a love for an active healthy lifestyle. In 2012, she took that love for fitness to the next level, where in October, she entered into her first competition. Not knowing what to expect, she was shocked to capture first place, let alone taking home the trophy for overall bikini winner. Less than 6 weeks later, she stepped on stage again, this time in an open competition and placed third. It was official; she was hooked. Six short months later, she went on to compete at the Ontario Toronto Supershow Provincials, taking home second place, and then third at the Ontario Natural Provincial Championships, qualifying for both open and natural nationals. She is currently preparing to compete at both the CBBF Nationals this July as well as the IFBB World Qualifier in August.

TF: You’re living a life already filled with activities; racing, sports and now fitness. Didn’t feel like you had enough to do?
JE: Originally, when I started out on my fitness journey, I had gone through some personal changes. I was always active at the gym and [fitness] was the one thing that was consistent in my life. I went to watch my first show in Stratford to see what the competition world was like and it was from that day, that my life changed forever. I began to research coaches and weigh out options.

TF: What was that education like? Was it easy to find someone you were comfortable with or did the search take a little while?
JE: To be honest, I was lucky. I found 5 or 6 coaches I was interested in, however I only spoke with 2. After speaking with my current coach, I didn’t need to research other avenues. The relationship and rapport that was built within 5 minutes of walking in his door was very unique and unlike any other. I felt comfortable and I knew that Mike was someone I would be able to trust. I was following a meal plan, with new workouts and goals within two weeks of the Stratford show.

TF: Your accomplishments are phenomenal. How do you see 2014 playing out?
JE: I hope that 2014 is a big and bright year for me. Although I have my goals set high within the fitness industry as I plan on attending both the CFBB Nationals in July as well as the IFBB Internationals in August, I also hope to branch out into the modelling industry and focus on goals and possibly a career within that industry.

TF: We’re confident that our readers are going to be seeing much more of you! Tell us something that nobody would ever expect.. And remember, we know about the drag racing!
JE: What one would never expect — well I can say no one would have ever expected I’d be the girl to step on stage in a bikini, or compete in anything as such. I grew up in a small city, playing with cars, snowmobiles, and four wheelers I spent more time covered in dirt.

TF: You look absolutely at home in a swimsuit, with glammed-up hair and heels. Are you telling us that that’s the last look people in your personal life would expect to see you sporting? Or is it simply the competing that would surprise your circle?
JE: Growing up, I’d say that’s definitely the LAST thing people would have imagined I would be doing.

TF: So now that you’re in the lifestyle, “game on”?
JE: You said it, game on. I’ve only gotten a TASTE of this industry, and I’m addicted. This is a lifestyle for me. I eat breathe and sleep training and nutrition. I thrive on the challenge and especially the change.

TF: Tell us about the nutrition side of things. Being active all your life is one thing, but the meal plans and fit eating must be new. How was that change?
JE: It sure was! There were a lot of changes involved in healthy eating and competition prep. The time that one has to put into preparing meals for numerous days was beyond foreign to me. I work a full time Monday to Friday government job and at the time was commuting 3 hours a day, not to mention my training. I quickly learned how to manage and balance my life. The first step was the mental aspect. I quickly learned that nutrition and diet needed to be very balanced. I eat a variety of foods, but all clean — healthy fats, complex carbs and of course PROTEIN. For me it was realizing that we eat to live we don’t live to eat

TF: So what’s the appeal with modelling?
JE: I really enjoy being in front of the camera. I’m a very happy person. So I like to show that off! Its similar to competing, it’s an amazing feeling. I believe I have a unique and versatile look, and go further then just fitness and gym shoots. I like being able to have different personalities when I’m doing a photoshoot. Where else can we do that? I will say though, that my main focus with modelling is and always will be to be a positive role model for all women across all levels or life; fitness or not. The one thing with photoshoots is there is no competition so it’s easy to have fun with it. There is no exposure to first, second or third place and there is no comparison.

TF: Who do you look up to? In industry or out. Who’s your role model? Why?
JE: Within the industry I look up to numerous athletes. Nathalia Melo – I love her energy on and off stage. She has a passion for health and fitness, and she is someone I would consider a very positive role model for women within this industry. She holds herself in a very positive light. Justine Munro – she literally was my motivation for my first two Regional shows, from lock screen to home screen, iPad to iPhone she was everywhere. Down to earth and a girl next door. She reminded me day in and day out, that I could and I would do this! Finally I can honestly say my two biggest motivators are my Mom and Dad. My Mom for SO many reasons; she is the STRONGEST person I know, she is the most selfless person I have ever met in my life. No matter what the struggle she can always find the positives in EVERY situation. I wouldn’t be half of the person I am today, if it wasn’t for my Mom. Then there’s also my Dad – he is the definition of hard work. He set’s goals, and always goes above and beyond those goals. He’s fearless, and unlike any other human being on this planet. From him I have learned that with hard work, dedication and faith we can achieve whatever we set out minds too.

1. Last movie you saw?  Wolf of Wall Street – CRAZINESS!
2. What’s the most motivational song in your playlist?  I listen to motivational videos on audio – bodybuilding videos – Success is a journey.
3. You find yourself at a spa with $200 in your pocket. What are you getting done?  Massage & a Facial
4. Do blondes really have more fun?  Of course we do!  Did we forget I drive a race car?
5. What’s the best thing so far in life to happen to Jade Atkinson?  The best thing that’s happened to me so far is being in the positive happy and balance life that I currently lead.
6. You toss a coin in the fountain and what would you be wishing for?  If I told you it isn’t going to come true! I make the SAME wish all the time.  Fountain or no fountain – every day at 11:11
7. One place on earth you MUST visit?  Greek Islands – EVERY WHERE IN EUROPE