Sedentary to the Stage: Lydia’s Journey

My journey began around Christmas 2009 when I finally made the decision to take control of my life. Over the previous years, I had been unhappy with my body after having been made aware of my overweight state by others at school. Throughout middle school and high school, I was bullied on the bus every day and teased by random peers who passed by me while at my locker. Eventually, I started to feel like I wasn’t worth any time and space.

I continued to feel this way throughout college, allowing the state of my body to dictate my experiences. For the first 22 years of my life, I wore oversized clothing atop my bathing suit whenever I went swimming. In fact, I avoided parties where I knew I would need to be in a bathing suit and tried to come up with excuses why I couldn’t go. Sometimes I just went and said that I “forgot” my swimsuit. I never went to my prom or any dances in school, feeling embarrassed and worried that people would give me a hard time. I never fought back because the one time I did, I was hit down even harder. Ever since then, I just let people say what they wanted, trying my best to ignore them. 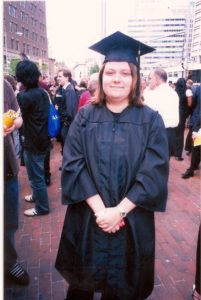 I always grew nervous when I realized I was required to take health-related classes both in high school and in college. I figured that when the discussion came to weight loss or weight management, everyone in the room would think of me. These kinds of thoughts ate at me until the age of 22. I was too scared to go to any gym, fearing that people would be watching me, laughing at me as I worked the machines incorrectly, and judging me just for being overweight and at a gym. Little did I know that the majority of people at any gym are not even in any kind of pristine condition and many were, in fact, overweight. I don’t know how many times I pulled into the local gym parking lot, sat there and watched people go inside, got scared, drove home, and told myself “maybe next week”.

It was Christmas 2009, when my neighbor said that my sister looked good because she had been working out, when I realized I wanted someone to finally say that about me. I wanted things to change and, after waiting for roommates, friends, and any other sort of companion to join me and give me confidence, I realized that I was going to have to do this myself. I told myself “now or never” and, that next day, I pulled into the gym parking lot, wearing my oversized hoodie and loose pants, and walked right in. At the time, I had no interest in weights and thought that was way out of my league. I got on a treadmill for the first time and started walking at a slow pace.

Over the next few weeks, I began going to the gym five times a week and taking weekends off. I went from walking slowly to running lightly at 3mph. I got faster and faster and began seeing the weight drop. I eventually realized that, in order to continue progressing, my eating habits would have to change as well. I switched to a typical lower calorie diet. Nothing special; Just ate more salads, soups, and not the heavy meals my family was used to eating. Apples replaced my usual late afternoon bowl of chips or ice cream. I continued to see the weight drop and continued cutting out more of the heavy meals and changing to healthier snacks.

I did this for about three months until I got offered a job out in Northern Virginia and realized I was going to have to move, and fast. I had lost about 40 pounds, starting at about 210 lbs down to around 170-180 lbs. The first thing I realized was that I would need to find another gym if I was going to keep my pace. It was worth every sacrifice I was making in the process at that time.

As soon as I moved out, not a day went by where I missed the gym. Even between all the moving and getting situated, I didn’t miss a day. I signed up at a new gym and immediately went in knowing that I wanted a personal trainer to help me break through my current plateau. Luckily, I got a good one. She gave me tips on what to eat, how much to eat, and showed me the weight machines.

I was on a roll until about Christmas 2010, when I had my first major setback. One night after coming home from the gym, about a week after a huge snowstorm, I got out of my car and slipped on black ice. I knew instantly I had done something catastrophic and would be out of the game for a good while. It honestly amazes me how quickly life can change. Especially when it comes to your health. I suffered a complete tibia-fibula break, immediately requiring surgery and crutches for about four to six months. However, I was able to get back into the gym by about summertime.

Although I was back in the gym, I had little motivation, couldn’t figure out why I was still working out, and was completely goalless. It seemed like my depression worsened and I was crying at least two to three times a week for a reason I couldn’t understand. Perhaps it was because of the lingering pain, or just the feeling of being lost. This persisted until, one day, I stumbled upon a photo. This photo was of a woman in incredible shape with the words “train insane or remain the same”. “Remaining the same” was the very thought that scared me into getting started. I knew I was in a mental gutter and needed some help. I knew I wanted to look like her, but I didn’t know who to turn to. I knew gym trainers would only get me so far so I did a bit of research on sites like bodybuilding.com and simplyshredded.com and found that a lot of these athletes followed similar diets. After discovering that this was a “sport” and many of these athletes competed, I knew I wanted a competition coach. Whether I was going to compete or not, I hadn’t decided, but I knew I wanted to be on the same level.

I did a quick Google search that same night and stumbled upon Stephanie and Doug Miller in Arlington, VA. After setting up my consultation with them, they completely revamped my diet and I began training with Stephanie Miller on a regular basis. I saw immediate changes as soon as I started their plan and was re-motivated all over again. I shifted my focus from mostly cardio to mostly weight lifting. It felt great doing something different and knowing that I was headed in the right direction.

In the fall of 2012, I competed for the first time in the Figure division at one OCB show and one NPC show. I placed fourth in my class at my first show and fifth at my second, but to me it was more of a celebration than a contest. After that competition season, I took some time off and trained for about six months. I decided to compete again in fall 2013. At first, it seemed like a good idea; what I didn’t realize in the end was that my metabolism hadn’t ever fully recovered and, by the final weeks of my prep, I was eating hardly anything. This taught me a valuable lesson and I decided I would give the stage a rest for a while.

I was about four months post show, in February 2014, when I began to feel like my body was craving something. I couldn’t figure out what it was but I had begun skipping meals on a regular basis and, about four weeks into it, I collapsed and found myself at the ER. I knew I would struggle again with letting go of what I presented on the stage and about every pound of water and fat that I gained thereafter. Even though it is natural, I had a hard time with body image, and still do. I had developed hypoglycemia, which also triggered panic attacks even after steadying my diet and getting my blood sugar back under control. I had an additional six ER visits with similar symptoms to hypoglycemia. However, it took over a month to be diagnosed correctly: panic disorder.

I spent about three months away from the gym, suffering as I was waiting for the medication to kick in. They were the roughest four weeks  because I did not know how to control what I was experiencing. I am recovering now and slowly taking my life back. I realized that “panic” was running my life instead of me. Things like driving by myself, going to the gym, running errands without my mom, who had been taking care of me and staying with me since she flew back at the beginning of this, evoked feelings of anxiety deep within me. It was just like that first step I took into the gym. I kne
w I had to just go on faith and get out of my comfort zone. That is the only way to make progress. I knew I was going to be uncomfortable and scared,  but I knew these challenges had to be overcome.

I just got back into the gym as of the first week of May and am continuing my recovery. I lost some strength and put on a good amount of weight due to my diet revamp to control my blood sugar, but I know it won’t be forever. Patience is the key to success. As for competing, I don’t plan on it at least for a couple of years, if ever again. It is fun but it does completely change your opinion of “fit” and sometimes, not for the better. I will continue to workout, get my strength back up, and jump back into my normal routine.

We all have our own pitfalls. It’s how you deal with them that makes you who you are. These kinds of experiences only make you stronger and challenge your mind to overcome obstacles. I see these challenges as small bumps in the road to my goals, but I still intend on hitting each and every one. Anything can be done as long as you want it bad enough; Ambition is what makes an athlete.

Editor-In-Chief Lisa-Marie Assenza is a Kinesiology student, former competitive gymnast, and fitness enthusiast. An avid reader and writer, Lisa-Marie's high language proficiency coupled with her passion for health and wellness provide her with a unique and impressive skill set that has made her a cornerstone to the Training & Fitness team.

← Previous Story Road to Recovery: A Competitor’s Triumph Over Binge-Eating Disorder
Next Story → The Plain Truth About Meal Frequency