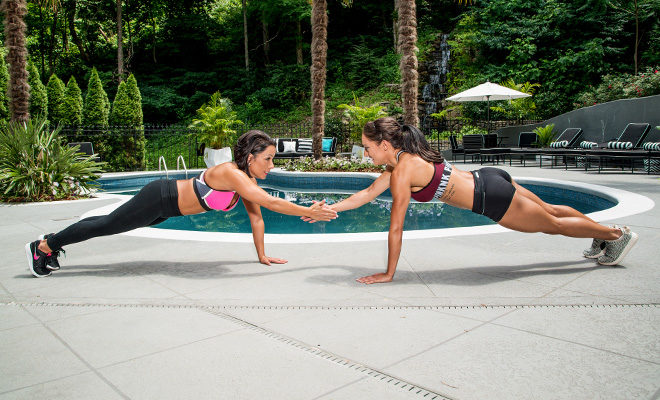 When Trina and Jayde Taylor, mother and daughter, arrive at our Nashville studio for their fitness photoshoot, they are good naturedly sniping at each other in the way that mothers and daughters have sniped since the human race was living in caves and Mastodon was a primary protein source.

All the while helping each other get bags and clothes out of the car, sorting what went with whom without having to ask or communicate and Jayde automatically putting the heaviest bag on her shoulder, it would go that way all day. The occasional bumping of verbal sharp edges followed almost immediately by a laugh or a hug and near constant teasing about who’s good side belonged on which side of each picture.  “Jayde started working out first,” Trina tells me during a break. “Actually I was a cheerleader and a gymnast when I was younger and in the late nineties, I trained for a fitness show.”.  Her nine months of training for this competition went out the window, though, when she was struck down days before the contest with pneumonia.

“I told myself I would never do that again,” Trina says.

JAYDE TAYLOR: When I first started training I did remember that my mom once had trained for a fitness show back when I was very young. She actually still has the dress she was going to wear on stage back in a closet at her house. Somewhere there is a photo floating around of me in that dress next to her in the dress when she was in prep! Unfortunately my mom wasn’t able to compete due to the fact that she got very sick only a few days out from her show. It is awesome knowing that I am doing something that my mom also once (and now) loves as well.

JAYDE TAYLOR: I started taking those pills and one side affect was being a zombie like for about a week. My hunger JUMPED through the roof and I was shocked at how much I was eating! After about a week I actually stopped taking them because I was so hungry all the time, it was ridiculous. I started working out not too long after that. I knew that eating all the extra calories wasn’t going to make me look the way I wanted to but training would.

“She just didn’t like the way she looked, when she took the pills,” Trina says. “So she walked into a gym and started working out. I helped her a little but most of her early training, she did on her own with research, she is very disciplined.

JAYDE TAYLOR: I’ve learned that Youtube is a competitors best friend. I watched hundreds of youtube videos of famous fitness models, read many bodybuilding.com articles and just tried to find out everything I could about supplements, training, muscle groups and competitions. My favorite YouTubers are Heidi Sommers and Nikki Blackketter. Both are so open about their progress and how they accomplished all that they have and I love that so much! I have learned a lot through the internet.

“She was living with me at the time and she is cooking all the time at my house,” Trina says.

“The [prep] food is great and it’s not really a diet, it’s a lifestyle. So she’s cooking and packing it all up in the refrigerator and I just kind of jumped on the bandwagon with the way she was eating. “Then I went to work out with her a couple of times. This was right after the first show she did.

She inspired me and to see that [inspiration] for what it is as a parent is kind of hard. It sounds terrible but it’s because you want to be the inspiration to your children so it’s almost a blind spot when they begin to inspire you. It’s unexpected, that’s the only way I can explain it.” Trina’s normally chipper tone had grown softer and more thoughtful.

JAYDE TAYLOR: Knowing I had the potential to inspire others has always been such an amazing feeling but knowing that I could inspire my mother, the woman who inspires me every day, was just even better than I could ever imagine. I love knowing I am helping my mom get healthy again and find a passion for loving her body and understanding how it works.

There is nothing better than sharing a passion for something that is good for you not only physically but mentally as well. Jayde’s debut as an NPC Bikini Competitor, at Chattanooga’s Battle on the River, was, shall we say, less than epic. She finished essentially last in her class and then had only two weeks to continue prep for the Flex Lewis Classic in Murfreesboro, Tennessee.

But it was at The Flex, sitting in the darkened auditorium during pre-judging, that the story took a near miraculous turn for Trina. “I sat through pre-judging for hours,”Trina says. “Finally Jayde was up there and, I’m getting chills even thinking about it, because two weeks earlier I watched her stand on stage like a deer in headlights and at the Flex she got onstage and she was just a natural. Her movements, her stage presence “I just started crying in the audience, all I could think was ‘where did that come from?’

Even a year later, Trina’s eyes mist as she remembers. “She’s shy, she’s so shy! And it (her performance that night) came out of nowhere! I realized that my little girl had found her path and that’s when it hit me that my daughter had been inspiring me.”

JAYDE TAYLOR: Stepping on stage is always going to be nerve racking. The first time I stepped on stage I had NO idea what I was getting myself into; the lights, the amazing girls standing around me and all the people in the audience is scary but once I got my feet wet it made the second show that much easier. Stepping on stage at my second NPC competition I knew what to expect and just decided to give it my all, and I did.

In the glow of Jayde’s second place finish at a major, state level show, Trina promised her daughter that when, not if but when, Jayde won her Ifbb Pro Card, Trina would go through the rigors of contest prep herself and compete. “So of course she won her pro card at the very next show,” Trina says, laughing.

Trina Taylor is a woman of her word. She trained for, and competed in last years Music City Muscle, in Nashville, Tennessee, placing in the middle of her class. Mother and daughter continue to inspire each other, training together from time to time with each offering a near constant stream of encouragement to the other.

As the shoot nears its end, I ask Trina what effect the fitness lifestyle learned from her daughter “Oh, it’s had a huge effect,” she says. “What I’ve discovered is that your body will work for you if you give it what it needs and nothing more. The only reason your body stores [fat] is for survival. If you feed your body every two to three hours it will use that food as fuel and it won’t store anything. “In the 12 weeks that I trained for the show, I fed my body and it worked for me, never against

What about the emotional side effects? “Well it has given me back my youth,” Trina says. “I’m the one who says how old I am! It’s hard to explain but I feel a gratitude when I go to the gym. Keeping in shape makes me feel good, it makes me embrace the fact that my body feels good.”

And all because her daughter decided she didn’t like the way her body looked and walked into a gym “I’m just so proud of her, Trina says. She could have been out partying it up, drinking, eating every kind of bad food in the world but instead she was at the gym and she was at home cooking her food…can you ask for anything more?”

JAYDE TAYLOR: Me and my mom have always been close. Since I was little she taught me the power of positive thinking and that has always been something that we have shared together. We read the same books, share our experiences and even lay in bed and journal with each other when I go over to her house to watch movies and The Bachelorette. Spending time with my mom is always something I look forward too, she is the person I go to for everything. I share everything with her! Now sharing a passion in fitness with her is amazing. She has taught me so much about everything and now being able to teach my mom something is amazing.

As they head for the parking lot, they begin teasing each other about how much better each one did during the photoshoot and how sad the other one is going to be when the photos come out because they had to stand next to such a natural star. They are laughing as they get in the car. Workout partners. Gym rats. Style advisers.

Shannon Fontaine is a professional photographer living and working in Nashville, Tennessee. He is married to stylist and jazz piano great, Teri Reid, and they have two children. Shannon's work has appeared in numerous fitness magazines and he is a regular contributing photographer to Nashville Lifestyles Magazine and his work with interior designers and architects has appeared in magazines world wide.

← Previous Story Boost Your Libido
Next Story → 5 Morning Habits That Can Change Your Whole Day!