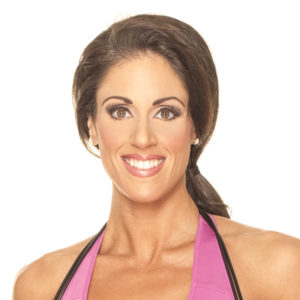 Sarah holds both an Undergraduate Degree in Biological Science and a Master’s Degree in Human Health and Nutritional Sciences from the University of Guelph. She played on the Women’s Basketball team during her Undergraduate studies and took on a leadership role for the team, winning the 2005 OUA championships and represented the University at the CIS National Championship tournament in Winnipeg. Sarah also played on Team Ontario, winning gold at the National Championship 3 years in a row. As a Master’s student, Sarah also worked full-time as a Personal Trainer, Group Fitness Instructor and Spinning Instructor.

After graduation, Sarah entered the corporate world. She currently works as a Brand Manager for a global sport nutrition and diet supplement company. When she isn’t diligently working in the diet and sport supplement industry, Sarah enjoys: running road races, duathlons, working out, and competing on stage as a bikini and figure competitor. Growing up Sarah was inspired by the strength and empowerment portrayed by women featured in fitness magazines. She aspires to do the same and hopefully influence women of all ages and the readers of Training & Fitness Magazine!