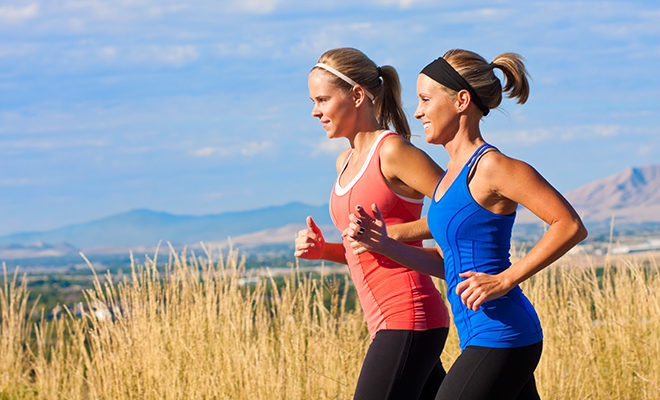 Comparing distance running to sprints can sometimes be thought of as coming apples to oranges; on one end of the spectrum, you have a runner putting in tons of miles and, on the other, the runner’s mileage is minimal and their training is primarily speed and power based. So which route is better? Which will best help you reach your goals? The answer is simple… both.

Before I discuss sprinters and long-distance runners, it is necessary to note that there are longer sprint events and shorter to mid-distance events where there is heavy overlap in training. Longer sprint events include the 400m, while middle-distance events include the 800 m, 1500 m, mile-long, and possibly the 3000m dashes. Typically, anything under 400 m is considered a true “sprint” event, and anything over 3000 m is a true “distance” event… though, I often find the 5,000 m to feel more like a sprint!

As I am not a sprinter (maybe in my next life I’ll be fortunate enough to have some foot speed!), I recruited a practicing sprinter to help me understand that there is more to sprinting than flying down the track for 100 m, practicing blocks starts, and lifting crazy heavy weights. Yes, those activities comprise a large part of their training, but there are also phases that involve running some basic mileage (20-30 minute runs), stadium stairs, hill repeats, and longer intervals up to 600 m.

As a marathon runner, I am often asked for some tips on running faster. Often times, the advice is sought out with the added comment, “I have already been upping my mileage.” My response… add in some speed work! As a distance runner, I still hit up the track for some speedier sessions (keeping in mind that “speed” is a relative term depending on your distance discipline), run hills, and perform plyometric and strength sessions at the gym.

Have you noticed the overlap between the two types of running? In my training, a perfect example of overlap would be the Brazilian workouts my coach has me perform. The workout starts with a core exercise (abs, pushups, super-mans, lunges), followed by a “sprint” of 100 m and a running/form drill at the opposite end. I do this routine ten times (e.g. core, sprint, drill, sprint, core etc.), and then I get 90 seconds to jog before I start into some longer intervals (400s, 600-800s, and 200s). All of this is considered one set, and I will repeat the entire thing four to five times. In the end, I have run four kilometers of “sprints” and just under four miles of longer intervals. As my season progresses, the intervals will lengthen, and eventually the entire workout is replaced with more marathon-specific intervals.

At the end of the day, it is important to note that although a sprinter’s “mileage” is typically less than that of a distance runner, and my “speed” sessions are going to be significantly slower than a sprinter’s, there are elements of both worlds that are necessary to keep progressing down the road (or track!) to your ultimate goals.

The Canadian record holder in the Marathon (2:28) and half-marathon (1:10:47), Lanni Marchant has represented Canada at the 2014 Common Wealth Games, the 2013 World Championships, and the Chiba Ekiden Relays (2008, 2010, 2011, 2012, 2013). Her role as a criminal defense attorney in Tennessee, and now Canada’s fastest female marathon, and half-marathon runner, make for an amazing “double life” that she takes great pride in.

← Previous Story How Much Cardio Do I Really Need?
Next Story → How The Lone Wolf Can Benefit From Running With The Pack