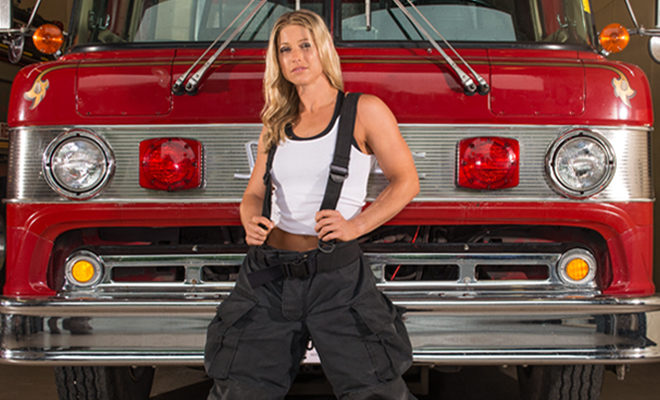 Picture a burning building engulfed in flames, with fire escaping from all openings. The inferno looks as if it has a mind of its own as fire dances toward the sky. Sirens approach and uniformed crew members run in one by one, like a football team running into a stadium for the championship game. They run into the burning flames, while the rest of us instinctively run away. The confidence and strength needed for this profession is unique, and fitness is not just a hobby; it is literally a matter of life or death. Firefighters race against the clock knowing that every precious second means their fight gets harder as the flames gain momentum and ground. Sprinting, climbing, breaking through barriers and debris – all while carrying an extra 50 lbs of gear, a large helmet, oxygen tank, flame retardant jacket, massive boots, and a mask that makes each breath daunting – are difficult tasks to complete. Then, there is always the possibility of having to carry another human being out of the dangerous environment. Firefighters are real life superheroes, and who doesn’t want to train like a superhero?

I have had the opportunity to train with a friend in Sudbury, ON, Trevor Fera, who is not only a firefighter, but the Combat Challenge World Champion (a sport based on firefighting skills). I have incorporated his functional firefighter training into my routine and although I will (hopefully) never have to run into a burning building, I feel that many of my key fitness markers have already significantly improved. Listed below are some of the areas which are focused on for firefighter training and specific excises to be ‘Fire Fit’! Put it all together and you have five workouts that will get you HOT, HOT, HOT! Cue the sirens – let’s get down to business.

A firefighter never runs in a straight line; they run into obstacles and have to reroute at a moment’s notice. As such, training agility using  a combination of balance, coordination, speed, reflexes, strength, and endurance is extremely important. There are three planes of motion that need to be incorporated to make you nimble in all directions. The first is the sagittal plane, which most exercises are performed in. This is your typical front and back motion like a step up. The second plane is frontal and the movements are out to the side, like a standing lateral dumbbell raise. Finally, the transverse plane uses diagonal movements, like a cable chop. Finding exercises that work in multiple planes can really maximize the effects of your workouts.

Circuit-type training is preferred to mimic real life situations- you never know when you may need to go from one scenario to another as quickly as possible. Try these exercises, starting with three rounds of 30 seconds of each exercise. Build up to 60 seconds of work for each exercise per round.

Prev1 of 3Next
Use your ← → (arrow) keys to browse
Related ItemsBodyExerciseFirefighterHottestTrainTrainingWorkout

Kristen Vidlak is a registered dietician and personal trainer. She grew up as a competetive gymnast and later attended the university of Maine on a full athletic scholarship where she was captain of their record breaking women’s track & field team. Currently, Kristen enjoys modelling and competing in fitness events throughout North America. Her experiences in athletic training and competing, coupled with her dietetic education give Kristen a unique and well-rounded perspective when it comes to health in fitness.